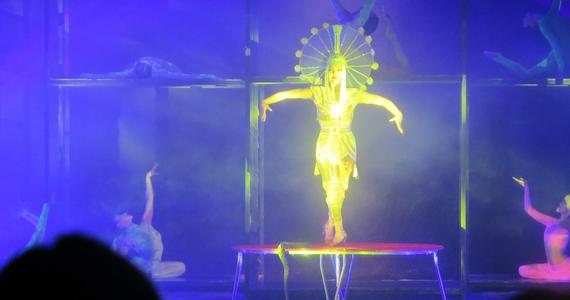 The night before last at the Academic Ensemble saw a spectacular performance of contortion, music, dance, aerial acrobatics and even fire-breathing. A stunning retrospective organised and directed by O. Tsetseglen, the talented contortionist of the National Song and Dance Academic Ensemble, in which 20 contortionists took to the stage to astonish and enchant the audience with a selection of traditional and contemporary contortion performances.

Supported by the Academic Ensemble, who are celebrating their 65th anniversary, it was a show quite unlike any other and one the audience will not forget for a long time. The show opened with a tribute to the sun, 10 contortionists writhing on a scaffolding and Tsetseglen decked out in a spectacular headdress and flurescent costume complete with a snake, as the sounds of the famous Mongolian long song “Uyahan zambuutiviin naran” filled the room.

After an appearance by Husugtun, members of the Academic Ensemble and runners-up on Asia’s Got Talent, and some of the Ensemble’s dancers, there was a dramatic retelling of the origin myth of contortion. The story tells of a beautiful young girl kidnapped from her family for marriage by a local Lord; however, when she arrives at his ger she begins to bend her body in ways so strange and extraordinary the Lord and his son are afraid and promptly send her back home.

The second half of the show could not have been more different from the first. Gone was the ger, gone were the traditional costumes and gone was the performance of shy innocence. In its place, emerged a very modern contortion, all sex-appeal, saxophone and sultry poses. The music blared out “sax… for sex…” as the scaffold from the opening revolved on the stage, the 9 contortionists back lit like silhouettes in red-light district windows and a long-haired man in their midst gyrating with his instrument.

The highlight of the second half was the group number: five women bending their bodies around one another with mesmerizing strength and precision, defying all common-sense understandings of gravity and human bodily possibility. The show came to an end with a number as outrageous as the rest of the show – a towering 3 meter high display of zubnik.

Overall, despite the almost jarring contrast between the first and second halves, the show was certainly a success. As the first contortion show to be entirely directed by the starring performer herself, Tsetseglen did an excellent job of showing the breadth and depth of Mongolian contortion today.